I recently drove down to Hawkes Bay and Martinborough wine regions to catch up with some of the latest cellar door experiences. If you plan to visit either of these regions then hopefully you will find this report interesting.

This area is most well known for Bordeaux blends, Chardonnay and Syrah but there are also very good wines made from Sauvignon Blanc (different style to those from Marlborough), Pinot Gris, Viognier, Gewurztraminer, Pinot Noir (from the higher inland sites), Tempranillo and some other lesser known varietals. Wine has been produced here since the mid 1800’s (Mission Estate where French missionaries made wine initially for themselves), and also has the oldest commercial wine operation established 1896 (Te Mata Estate although only under the current ownership since the 1970s). Several more companies started to produce wine commercially in the 1920’s including Vidals, McDonalds and Glenvale (now Esk Valley). Hawkes Bay is NZ’s second biggest wine producing region with a bit under 9% of NZ’s wine (ie 33,700 tonnes of grapes picked in 2017). There are several sub regions within Hawkes Bay with the most well-known being Gimblett Gravels, Bridge Pa Triangle, Havelock Hills, and Te Awanga. 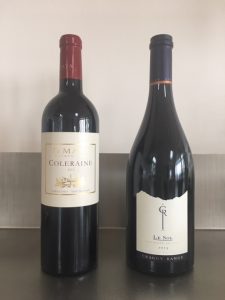 This producer has the oldest wine buildings in NZ dating back to 1896, which are still in use, and NZ’s first legally-recognized vineyard sites, which are officially protected for their heritage value. The current owners made a name for their Coleraine Cabernet/Merlot blends with the 1982 vintage considered to be a big step up in quality compared with other wines that came before. This wine has continued to grow in reputation, and with additional high-quality wines also produced, Te Mata is considered to be one of the very top wine producers in NZ. There are three tasting options here – the Cellar Door Tasting of six current release wines for $7.50, a Tour & Tasting of one of the vineyards, winery and followed by a Private Tasting for $30, and the VIP Tour & Tasting which includes the tour above plus a Private Tasting of current and cellared vintages of Te Mata wines in their Coleraine Room overlooking the estate. This costs $75. The latter two tours are subject to availability and prior booking.

This is the tour and tasting that I participated in and the tasting included a selection of their Estate Vineyard wines, and then the full range of current release Premium wines (excluding the Zara Viognier which wasn’t available). This included aged wines – a 2008 Cape Crest Sauvignon Blanc and a 2002 Coleraine. This was the best wine tour and tasting that I have done in NZ and if you decide to do this you need to allow at least two hours. My favourite wine overall was the 2016 Bullnose Syrah (wonderfully fragrant) and the 2017 Elston Chardonnay. The 2016 Coleraine was a little closed and tannic at this stage but this label does age very well and should open up and soften with time.

I should declare that I have been buying Coleraine since 1984 vintage.

This estate was established in 1985 and is still under the same ownership. Their first vintage was in 1988 and early on they got a big reputation for their Reserve Chardonnay and in good vintages for their Old Olive Block red. Their casual rustic restaurant opened in 1992 and ever since then this has been a go to location on the wine touring map. This is a cellar door that is still very much the way it used to be in old Hawkes Bay and all the better for it. Wine tastings here are free for the first 3 wines and I think $3 for each other taste. They always seem to have some of their Reserve wines available for tasting. My favourite wine was the 2017 Reserve Chardonnay followed by the 2016 Reserve Syrah. I had wanted to try the Old Olive Block but it wasn’t available on that day.

I went to do a tasting here only to discover that they were closed. I made the mistake of initially reading the Google ad about the opening hours which said that they were open only to find that it wasn’t accurate. However when I think about it I had checked the website and I thought that said that they were open so??? This is a shame as I was really looking forward to trying the Reserve Tasting here as I have enjoyed plenty of their Estate Syrah and Chardonnay wines in the past. Ah well it will have to be next time!!

This is not just a wine producer with a very good restaurant but also an accommodation provider and a venue for small scale concerts. The cellar door can be busy but they have many tasting and tour options so if you are serious about wanting to find the right option you need to contact them and book.  I dropped in here without advising that I was coming but luckily it wasn’t too busy so I did the standard tasting of 4 wines for $5 which included one of their Reserve wines – a 2014 Tempranillo. My favourite wine was the 2017 Pinot Gris although the 2016 Chardonnay was also quite good.

This is a very striking series of buildings and their wines come with a huge reputation. On this site they have a small winery, a famous restaurant which is currently under renovation and I think re-opens again in October, a cellar door that was renovated in the past year, plus a series of vineyard cottages with more being built, and a luxury lodge, that will mean that they have accommodation for about 35 people.

The cellar door is now particularly impressive with different spaces for both seated and standing tastings. There are four tasting options – Standard Tasting for $7.50, Varietal Seated Tasting of 3 vintages of Pinot Noirs for $30, Prestige Seated Tasting of the current release of their Prestige wines for $50, and the Ultimate Prestige tasting of two vintages of each of the Prestige wines for $75. This last tasting must be booked in advance. I didn’t take any particular tasting but instead tried a cross section of all of the wines. It just confirmed what I already though I knew – they are all good so it just comes down to your budget. My two favourite wines were 2016 Sophia and 2016 The Quarry. I didn’t try the 2016 Le Sol Syrah.

I should declare that I have been buying Le Sol since the 2001 vintage.